Our Dachshund at Ramsey Creek Kennels

Please browse our Dachshund puppies below and after reading our Policies you may continue in reserving one today!


About the Dachshund breed. 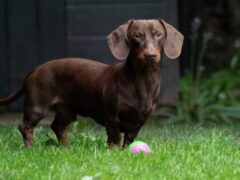 What is a Dachshund

The name Dachshund means "badger dog" in German, with "dachs" meaning "badger" and "hund" meaning "dog." Dachshunds were first brought to the United States in the 1880s and quickly gained popularity in the 1930s and 1940s.

Dachshunds are scent hound canines that were bred to hunt badgers, rabbits, and foxes. They make wonderful family pets, show dogs, and small-game hunters today because of their flexibility.

The Dachshund is known for its distinctive appearance, which includes short legs and a large body. The first Olympic mascot has a long history as a hunting hound, making him ideal for awakening badgers from underground burrows.

Dachshunds are a joy to own and train, despite the fact that they demand a lot of patience. The breed is well-known for its extroverted demeanor and great athletic ability. The Dachshund is available in two sizes approved by the AKC: tiny and standard. When fully mature, standard Dachshunds stand 8 to 9 inches tall, whereas small Dachshunds stand 5 to 6 inches tall.

You may know them by one of their many nicknames, including Wiener Dog, Sausage Dog, Doxie, and more. If you’re looking a little pooch who will keep you on your toes and shower you with love, this may be the breed for you.

Dachshunds were initially introduced in the United Kingdom in 1840. The Royal Family had them brought back to shoot pheasants. The breed's popularity was aided by Queen Victoria's apparent fondness for it.

The dachshund was bred in Germany hundreds of years ago to hunt badgers. " The three varieties of dachshund, smooth-, wire-,and long-coated, originated at different times. The smooth was the first and arose from a mixture of a miniature French pointer and a pinscher. The breed also comes in two sizes: standard and miniature, with the standard the original size.

The dachshund has short, strong legs that enable the dog to dig out prey and go inside burrows. Larger versions of the breed were used to chase deer or fox. Smaller dachshunds were bred for hunting hares and ferrets. The breed is still used for hunting, primarily in Europe, but in North America this dog is usually a family pet. In fact, it is one of the most popular AKC breeds.

The Dachshund is described as intelligent, energetic, and brave to the point of recklessness. He's been bred for tenacity, which is another way of saying he's obstinate. Dachshunds are known for being amusing and bold, yet their true desire is to snuggle with their owners. This trait, for many Dachshund owners, surpasses having to deal with the breed's insistence on getting his way.

The personality of a Dachshund might also differ according on the coat type. Wirehaired Dachshunds can be cheeky troublemakers because they have a terrier background. Dachshunds, like all dogs, benefit from early socialization, which includes exposure to a variety of people, sights, noises, and activities.

Socialization is important for your Dachshund puppy's development as a well-rounded dog. Enrolling him in puppy kindergarten is a terrific place to start. Regularly inviting visitors over and taking him to crowded parks, dog-friendly stores, and leisurely strolls to meet neighbors can all help him improve his social skills.

Caring and Living with a Dachshund

Dachshunds have a lot of energy and stamina. They enjoy going for walks or playing outside with other dogs, as well as hunting and digging. They are also active indoors and can live comfortably in compact spaces if they get a moderate amount of daily movement. Aim for two half-mile walks per day (each lasting around 10 minutes). When time is limited, a game of fetch will satisfy their demand for activity.

Because of their long backs, Dachshunds can be prone to disk problems, thus may not be a suitable choice for someone who has a lot of steps in their home. To protect the dachshund's back even further, the dog should not be allowed to leap on and off of furniture, and his weight should be controlled.

Aside from an occasional rubdown or brushing, the smooth-coat dachshund requires very little coat care. Daily brushing and combing is recommended for long-coat dachshunds, while stripping is required at least twice a year for wire-coat dachshunds. The breed is regarded as a medium shedder.

If properly motivated, Dachshunds can learn quickly. To maintain their attention, use positive stimuli like food rewards or a favorite toy, and keep training sessions brief. If the Dachshund is forced to repeat the same exercise over and again, he will become bored soon, therefore make obedience training entertaining and interesting for him.